“If more than one of us felt the stirrings of a major shit declaring its intention to see the world beyond our buttholes, then we were in trouble because it meant someone had to use our perpetually clogged toilet, which wasn’t capable of handling anything more than mice pellets, and we would have to dip into our supply of old toothbrushes and chopsticks to mash our king-sized shits into smaller pieces.”

Pretty much sets the tone for the book: No pretensions and often obscene. Zhang writes shamelessly, as if she thinks she could never look back one day and be embarrassed by anything at all. This is admirable. For a moment, I thought the first story was autobiographical and was fairly (extremely) concerned.

Zhang is the first author published by Lena Dunham’s (problematic fave? Another conversation) Lenny imprint and you can completely see why it’s on brand. A lot of this book reminds me of that scene in Girls where Adam and Hannah are showering together and Adam pees. On purpose. And Hannah still wants him.

Sour Heart is a collection of seven short stories about the young daughters of Chinese and Taiwanese immigrants coming of age in an America that barely accepts them. Zhang frankly details young female protagonists discovering themselves in relation to their peers, family and detractors. It’s the Chinese immigrant experience in America. It’s also girls taking advantage of their ‘latch-key’ kid status to experiment with their sexuality. Whatever Sour Heart is, it’s not boring. Zhang even does something rarely seen in immigrant accounts- she includes the other ethnic groups in proximity (Blacks and Hispanics). Having said that, it is only really kids at the run down school Christina attends or her mum talking about drug dealers and street warfare with Asians. So there’s that.

Some of the stories are cleverly linked (or all of them and I just missed it). In We Love You Crispina, Zhang introduces Christina- the book takes its title from a nickname given to her by her mother, due to her love of sour treats. At the end of the book, ‘You Fell Into The River and I Saved You’ returns to Christina as a young adult, bemused with her hipster of a younger sister who, having been born in America, is humorously far removed from their struggle. She’s excited about moving into the very area her parents fled years earlier. For an extortionate rental price, of course- its gentrified Brooklyn. Somewhere in the middle of the book another mother mentions Christina’s family to her daughter- if only condescendingly.

Zhang writes shamelessly, as if she thinks she could never look back one day and be embarrassed by anything at all

Zhang’s writing often seems frantic, with long sentences and a simplicity which helps credibly convey the voices of the young characters. All the stories are innocently intimate- like your friend’s little sister telling you what’s going on at home when you are aware that you aren’t suppose to know. At times this is endearing- ‘The Evolution Of My Brother’ is about a sisters love for a baby brother she doesn’t want to let go. At times it’s funny- a grandmother claiming to produce breast milk everlasting enough to feed even her grandkids in ‘Why Were They Throwing Bricks?’. Other times, its harrowing – ‘Our Mothers Before Their Time’ starkly details torture during the Chinese Cultural Revolution.

Sour Heart resonated with me

Not because I can relate to all these stories (and I really can’t relate sometimes) but because as a child of immigrants myself, I have lately been wondering about immigration does to family dynamics. What do new opportunities or broken expectations do to husbands and wives, fathers and daughters. There’s a human element behind the stats. Christina’s mother is obviously bitter about what she could have been, had she stayed in China instead of following her husband and his half baked dreams to America. They were all the ‘brightest and best’ but somehow ended up living “between a drug house and another drug house”

Although the main theme is the immigration of Chinese families to USA, Sour Heart is really about familial love and girls growing up. There is a deep love that fuels the sacrifices immigrant parents make for their children. It’s only a deep love that would enable Christina’s Dad to give her his food then eat her vomit rather than have food go waste in times of poverty. (yes, you read that right) Sour Heart is really about how families mould us, regardless of who you are. The most basic need to be loved and belong. That’s where Jenny Zhang wins: everybody understands that. 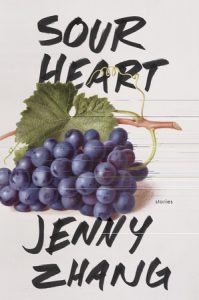 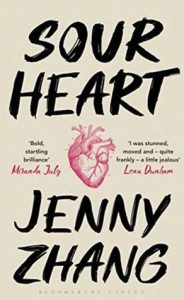 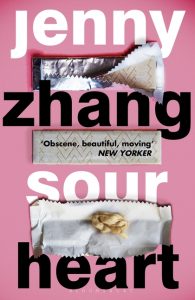 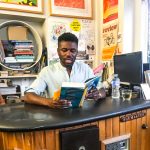 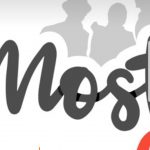 A Podcast Episode #1: Mostly Lit- The Many Faces Of Jay Gatsby 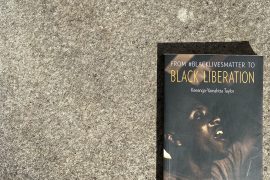 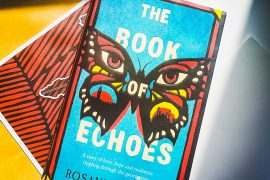 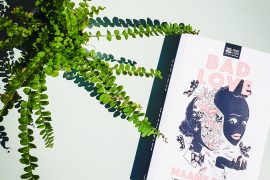