First Read:  2011, It was exciting to see an African take on graphic novels and Aya didn’t disappoint

Was it good or bad? This was quick, funny, warm and energetic. There’s a hint of nostalgia , even though I’ve never been to Côte d’Ivoire… or the 70s.

Aya De Yopougon (Aya Of Yop City) is the first in a series of six Aya stories created by writer Marguerite Abouet and artist Clément Oubrerie. We meet a young, level headed Aya and the continuous chain of liabilities that are her family and friends. Residing in vibrant Yopougon (Yop City), she learns, parties and occasionally flirts. Not with the young man her parents want her to marry though. Her good friends Bintou and Adjoua cover that ground for her- a little too well as it turns out! Along the way the reader gets a mischievous introduction to some of the charms of African city life.

Set in 1970s Ivory Coast, Aya Of Yop City is subtly socially and economically aware. The country is enjoying relative wealth following independence in 1960 and it’s residents are definitely celebrating the benefits while they last. There are never ending street bars welcoming everyone and a sunny optimism in the air. There are nods to brands like Nescafe, Omo and Solibra beer – all of which had recently become more accessible to the growing new middle class. We see an obvious rich-poor divide, amusingly shown by playboy Moussa’s parents’ disdain at the company he keeps.

Seeing though the eyes of Aya gives an insight into life as an African girl in the 70s. As a young woman, Aya constantly argues her admirable aspirations with her parents amid slowly changing attitudes. She still sneaks out with her friends come nightfall like some nineteen year olds do. She also still has to fend off unwanted admirers- more escaping by dashing through the streets than swiping left on Tinder.

Aya is far from a history lesson though, it’s light hearted entertainment. Abouet aimed to show the bouncy side of Africa often missed in the media but enjoyed by the citizens. The every day dilemmas of the characters are colourfully told with a chuckle, cheering you to laugh along. There are parties, romances, easily enraged parents and young folk misbehaving. You get a sense of the local humour –an open market square where the youngsters go for after dark liaisons is nick named “Thousand Star Hotel”. It’s a bunch of scattered tables in an open lot. 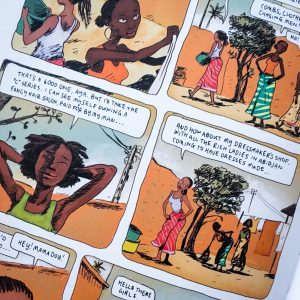 Oubrerie delivers lively illustrations throughout. The vivid green, bown and goldish earth tones warmly transport you through an animated Ivorian daydream for pages of excitement. The visuals tell the story so well, there isn’t a need for much narrative or speech bubbles, making this a very easy read. Although beautiful, these aren’t complicated illustrations, they remind me a little of the jaunty cartoons in African newspapers. What makes them stand out is the attention to facial expressions. Annoyance and dismay are shown particularly well for some reason. Oubrerie also takes care with the scenery in the background drawing the reader into the whole experience rather than just the characters at the forefront of the frames

There are even a few tempting recipes and a two step dance lesson at the end of the book which could come in handy if you visit. Or just imagine visiting.

Apparently, Aya was also made into a movie in 2013 which I’m going to have to track down soon. Trailer looks amazing but it’s in French!

Recommend it? Yep, entertaining graphics and a quick read to guide you through the bustle of Yop city.

Would you read it again? Just did!

For The Stack: Love & Rockets 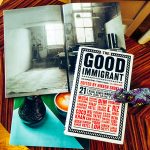 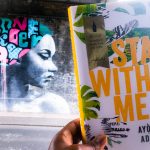