The Book Of Echoes by Rosanna Amaka is a glimpse at generational trauma within the diaspora. From start to finish, I think ‘echoes’ was the perfect word to use.

The book is narrated by the spirit of an enslaved ancestor, roaming the earth in search of children she lost. It is split into alternate parts, separately following the stories of two young Black people through critical points in their lives . We first meet Michael, a British Jamaican in 1980s Brixton and Ngozi in 1980s Nigeria.

The spirit’s account of capture and trafficking was moving, even upsetting at times. She held my attention from the start. It provides a deep melancholy tone that wraps itself around the whole story.  Placed at the beginning of chapters, however, it did sometimes seem to interrupt continuous narratives about Michael and Ngozi.

The Book Of Echoes prioritises the trauma in our history

Michael and Ngozi represent different branches of the diaspora, allowing us to look at some differences between African and Caribbean experiences- and even fleetingly explore their misgivings about each other

Michael and Ngozi’s stories are both moving. Both explore the characters’ respective coming of age through their familial obligations. We see how culture and race deeply impact both of them. This is another book that does the important job of exploring the personal within a well known historical narrative.

I did find most of Ngozi’s story a little more natural and easier to empathise with. I wasn’t always sure about the use of colloquialisms!

As you may know, I love London in my stories. I enjoyed the brief nods to Brixton’s history- the riots, Choice FM offices opening, elation at news of Mandela’s release, impending gentrification.

The overarching themes are covered well throughout the stories. Mental health in the black community, expectations of womanhood, the challenges of  Black masculinity, police brutality, family, love, fate and the devastating power of bereavement are natural elements in the story.  At the heart of The Book Of Echoes are families under turmoil and Rosanna Amaka is passionate in their depiction

Occasionally, I found there were too many messages and ideas included so some passages seemed engineered. For example class distinction between Black people and also interracial dating are touched on. Both are very briefly visited so the discussions are already well known and laid out, leaving little requirement for the reader think and draw conclusions. Intentional?

At a point, I wondered if the work could have been a collection of three short stories instead but I was proven wrong when Amaka beautifully and warmly brought the focus back to what is important about The Book Of Echoes. Learning, healing and sacrificing for those we love.

Have you read any books on generational trauma?

Have you read anything you thought was perfectly titled?

The Book Of Echoes, published by Doubleday 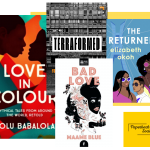