I loved My Brilliant Friend, it’s so beautifully written. The story telling feels like it’s from the heart without a care for what is expected. It feels like Ferrante is just telling a story how she wants to- that is to include all the elements she cares about. Women, society, intellect, class, relationships. Elena and Lila are coming into knowledge of the world with a compelling eagerness to learn. It’s unusual and refreshing! Intellect isn’t usually a focus in stories revolving around adolescents, especially not girls.

My Brilliant friend is the first of Ferrante’s Neapolitan novels. It’s based around the friendship dynamics of two girls growing up in a working class Italian town in the ’50s. Coming of age? Yes- but it is also really telling the story of a community. Im a fan of stories that chart the evolution of families and generations. It feels organic- clear that it wasn’t originally written in English. The rhythms are different, syntax is different. Also Noticed it while reading So Long A Letter and People From My Neighbourhood.  I will definitely be adding more translated texts to my TBR

I’ve never read anything like it before, it’s extremely introspective. Very dramatic. Elena is taking us through the dynamics of their friendship from her perspective. Through Elena’s  eyes, their friendship is all consuming, sub consciously veering into all aspects of their lives and decisions. I’ve never read story in which the protagonist’s every move or decision is unintentionally(?) influenced by someone else. To the point where you wonder if the protagonist is really the person whose perspective we are not hearing.

I loved that Elena and Lila spur each other’s curiosity on. Elena is more introverted, cautious, eager to impress her friend. Lila is more confident, fiercely intelligent, charismatic, Alpha B from birth- It would appear. Lila effortlessly influences or enchants everyone who falls into her path . She isn’t a typical nice girl- she does what she wants. I like imperfect characters, although their relationship seemed worrying at times. If they were 30, we would call it toxic.  Ferrante presents Elena as being in awe of Lila but I think they are both in awe of each other. Both in fear of not matching up- true to adolescent anxiety. I like that what binds them is a desire to know more about the world around them- knives sharpening knives.

Being life long friends with someone so enigmatic seems extremely tiring. Invigorating, stimulating but….TIRING. What is interesting is that it is clear at a point that Lila thinks just as highly of Elena. Who then, is the Brilliant Friend? What would the book sound like from the other end? If Lila had written it instead?

Does brilliance belong at home?

I’ve never read anything where all the young people were so self aware. So aware of where they stand in society. So aware of what they need to do to ascend. Who they need to love, to ascend. So aware of what is and isn’t permitted of someone of their class. The same goes for gender – both girls seem very aware of what is expected of young women- sometimes they fall in line, sometimes they are very happy to subvert the norm. My Brilliant Friend throws a light on the misogyny that can easily become accepted within small communities. You wonder how either girl became so brilliant in these surroundings. It’s clear that they a force destined to move beyond their restrictive, traditional boundaries. Do they belong there?

There is a romance and urgency throughout. Oh and that ending! Ferrante might get me reading the series which is something I never do! I haven’t read a series since Tracey Beaker or Naughts and Crosses! Don’t know if i should risk watching the HBO series!

I didn’t expect to read this and love it but I did. I can now see why people keep talking about it.

I listened to a lot of this as an audio book. The narration by Hillary Huber was excellent. Try and forget the American accent. 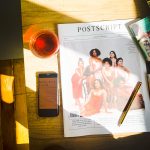