Chinua Achebe’s Things Fall Apart is a genuine classic for me. There is just so much to be said on the themes and ideology that make up this story. No matter what I say, I’m sure someone, somewhere, some academic or reader has said it better.

The only thing I can offer right in this moment are personal impacts, and even with that, I wouldn’t know where to begin. The colonisation? The introduction of capitalism? The turning of clans, corrupting from within? The way even the most prominent of characters can be reduced to footnotes in their own story? Some aspects really do transcend time and space to hit me.

Chinua Achebe wasn’t even trying to impress us, it reads just like a well written story but you can’t help but learn from it

There are so many beautiful details. The community out look, the farming, the speaking in proverbs.  Achebe really builds up the culture and traditions. The proverbs thing, I was in two spaces on! One was – hurry up and finish the sentence please! But it was also kind of comforting because that’s how my grand parents/ aunts/ uncles liked to talk sometimes. All of these things together reflected a picture of how much of a culture was already in existence. Much of the book is detailing every day village life. Chinua Achebe wasn’t even trying to impress us, it reads just like a well written story but you can’t help but learn from it

Another thought is that as a woman, I probably would not have survived all the restrictive roles.  Easily would have been outed as a witch within the passing of two moons. Even Okonkwo suffered for his accepted interpretation of masculinity( although it could be argued he was just bending against his father’s characteristics).

Something I did notice on this second reading is that the word ‘Black’ as a description of a character’s person didn’t occur until about two thirds into the book. Even though the story is set in 19th century Nigeria, nobody was ‘Black’ until the white missionaries showed up. At the point where I noticed it, the detail was even only mentioned in passing, Incidental: “The other four black men were also their brothers, although one of them did not speak Ibo” . It wasn’t even the point of that sentence. I don’t know if that was deliberate but it might as well have been. It reminded me of one of the ideas in ‘Between The World And Me’ by Ta-Nehisi Coates where he talks about White Supremacists needing Black people to be black just so they could exist. To validate their ‘supremacy’ . So they could be ‘white’. I’ve always found that idea striking and this brought its back.

Honestly so much to talk about in this book. I even missed some things on first reading! Give it a few years, there will probably be a third reading for me.

Simplicity in the narrative makes it so easy to read. I like the way customs and traditions are explained so clearly and matter of factly that you can feel part of the village. I went through different emotions reading it. At times not even knowing what to think about Okonkwo, talk about a flawed protagonist!

Whatever else is to be said about this book- even as just a story, it’s a expertly written, very enjoyable. But it’s so much more. I think it is a must read. You’ve probably heard that before.

My copy in photo published in 2006  by Penguin 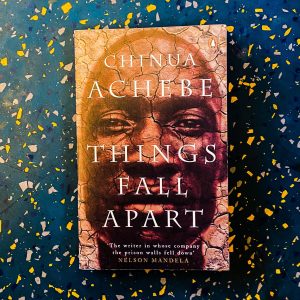 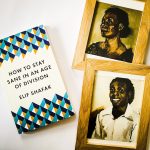 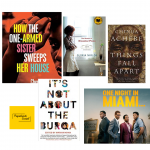 January Wrap Up And One Night In Miami