Empire Of Pain had me completely hooked from the beginning.  Although I have a healthy dose of cynicism running through me at this point, it is still astounding to realise what people are willing to do to maintain power and wealth. It’s still shocking to read how a perfect storm of political influence, blind capitalism, careless marketing and unfettered greed was allowed to decimate so many lives. 500,000 plus lost lives. Under the guise of medical care no less

I have so much to say about this book and I really should have taken notes as I listened to/ read the book. Next year, I will be different.

Influence In A Name

Coincidentally as I’m posting, the Metropolitan Museum of Art (NYC) has announced the removal of the Sacklers name from several- not all- exhibitions. The name remains on a number of prominent institutions, including many UK museums and universities (Oxford, V&A, Tate Modern). A darker side of philanthropy is apparent in the book– functioning  to obscure means of obtaining wealth by instead mainstreaming a veneer of generosity and innovation. The family displayed a desperation to be accepted into WASP society. Millions of dollars to show prestige and distract from how they reached their heights

Over the past decade, you will almost certainly have seen news headlines following the US opioid crisis- in particular OxyContin. Investigating the story of OxyContin’s proprietors, Patrick Radden Keefe tracks the Sackler family’s evolution from immigrants driven by survival to completely corrupt pharma titans. It’s as much a review of inherited power and debilitating excess. I started watching Succession again – it’s the same entitlement and blinding lack of empathy. At some point, these people stop registering what it is to damage other people- creating another reality for themselves.

Empire Of Pain begins with Arthur Sackler’s childhood and transition into a successful businessman and doctor. He supports his brothers Mortimer and Raymond through medical school. Eventually they set up Perdue Frederick which later became Perdue Pharma- producers of OxyContin.

The role of deceptive, targeted marketing cannot be overstated

Reading about Arthur’s role in transforming marketing and advertising within the pharmaceuticals industry was a revelation. I’ve always seen pharmaceutical sales agents in American movies and took their methods as a (weird) given. He was obviously revered for his innovations. In the 60s/70s, long before OxyContin, Arthur’s mode of aggressive, deceptive marketing (then with Roche) led to the successful sales of Valium to people who clearly didn’t need it- definitely not in the doses given. At a time, it was women in particular. Pop a pill and start the housework.

The scale of reckless drug pushing is unbelievable- highly addictive opioids marketed as cure all pain tablets. Oxycontin was touted as a drug to “to start with and to stay with”, exploiting needs of chronic pain sufferers, while at the same time promoting the opioids as everyday drugs for anyone. The addictive potential of OxyContin was grossly, deliberately underplayed. It is actually twice as powerful and addictive as morphine. Of course the Sacklers blamed addictive personalities

The complicit network required to make the distribution work is so expansive- from regional pharmacies to doctors to sales agents to the FDA. 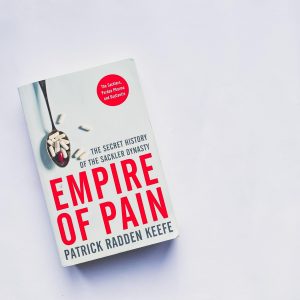 Multi generational narratives fascinate me in both fiction and non fiction. I found it interesting seeing how the family evolved from first generation ambition (Arthur, Raymond, Mortimer) to second generation corruption (Richard Sackler) to a third generation who now want to distance themselves from the scandal while simultaneously benefiting from the accumulated wealth. Being a family story, there was a fair amount of scandal, marriages breaking, a drug overdose within the family, relationships breaking down, cult of personality, rampant egos

There does need to be sensitivity applied in assessing the crisis as OxyContin and similar opioids continue to be invaluable in pain management for patients suffering chronic pain, especially late stage cancer patients. In this respect, its important not to demonise the opioids and their users where use is appropriate. It shouldn’t be forgotten amidst the sensationalist aspect of the story. Patrick Radden Keefe does note this while also recognising the need to report on the impacts of prescribing OxyContin where not required, for the sake of profit.

It is evident that the amount of research that went into Empire Of Pain really sets it apart. Over 200 interviews, review of court and company documents, use of other journalists’ work- all of which Patrick Radden Keefe is transparent about in his notes.  Empire Of Pain expands on Patrick Radden Keefe’s 2017 article  “The Family that Built an Empire of Pain”. Keefe also references Barry Meier’s 2003 book “Pain Killer: A ‘Wonder’ Drug’s Trail of Addiction and Death,”. No cooperation from the Sacklers, of course. A strong suit of the book is the focus on the family, rather than Perdue as a company that they’d intentionally tried to distance themselves from

I found Empire Of Pain so easy to read. The research is wrapped into a captivating story. If you are wary of the size, I’d suggest the audiobook which is well narrated. I can definitely see myself picking up Say Nothing after this 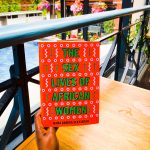 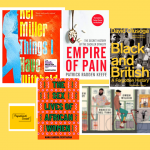