At the heart of The Louder I Will Sing, I saw a boy- and then a man- who loved his mum with everything. With that love driving him, Lee Lawrence was determined not to let Cherry Groce’s legacy be reduced to unanswered questions and unwarranted police gunshots. He wanted her to be proud, honoured.

In September 1985, his mother, Cherry Groce was shot and paralysed in a careless, wrongful police raid at her home. Little reconnaissance or investigation had taken place before hand. Lee (11 at the time) and his siblings witnessed it and you can really feel the shock. The shooting sparked the 1985 Brixton uprisings. The fragments in her spine eventually killed her 26 years later.

You often get the sense of a man baring his heart

In a candid, straight-forward voice, Lawrence details his journey from days as a young boy growing up in Brixton to a man relentlessly challenging the Metropolitan Police and the judicial system. For thirty years, he did not give up! For thirty years, he fought for justice. Regardless of who was on his side, regardless of how judges, lawyers and PCs brushed him aside. It’s emotional,  you really feel the frustrations, fears and triumphs with him. It is heart-breaking, hearing what the family had to go through, especially when seeing through the eyes of a child. Lawrence remained hopeful through alot and he saw it through. There is so much inspiration in there.

Far more effective than the distance of a textbook, this is the importance of telling our own stories

Following his journey, the book naturally chronicles the experience of a young Black man growing up in 80s and 90s Britain. With a conversational tone, Lawrence gives insight on the excitement and rush of adolescence but also the struggles stemming from systemic and every day racism. In doing so, he also gives context to some central events and sentiments in modern Black British History. Windrush, the New Cross Fires,  Brixton Riots, Stephen Lawrence’s murder, BLM marches. It’s his own perspective, his own experience.  The Louder I Will Sing is far more effective than the distance of a textbook and this is the importance of telling our own stories

What is striking is how little seems to have changed. Lee Lawrence talks about financial difficulties at home in the 80s/90s. What impact that would have on his meals. How he would sometimes go to school just to make sure he ate. Here we are in 2020, MPs give no priority to feeding underprivileged children. A determined young footballer has to step in instead.  The accepted societal attitudes toward non-whites and immigrants is palpable in the narrative. It’s 2020 and we are hurtling towards a no deal Brexit  on the strength of essentially the same attitudes.

It does show how far we have to go to improve race relations in the UK. How far the police are from operating without brutality. As much as this, The Louder I Will Sing is a a memoir of  hope, inspiration. I took from it the power of love and courage, of making positives. Lawrence’s efforts have already shown impact in the Cherry Groce Foundation- offering assistance in restorative justice. He also founded Mobility Taxis with the knowledge from being a carer for his mum.  Lee Lawrence made sure that his mother did not die in vain.

Sir David Adajaye has designed a memorial for Cherry Groce to stand in the Windrush Square in Brixton, marking the 35th anniversary of the shooting this year.

Channel 4 are developing a four part series based on Lee’s life.

The Louder I Will Sing by Lee Lawrence, published by 2020 by Little Brown. Thank you for sending a review copy 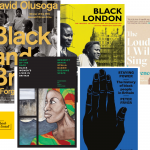 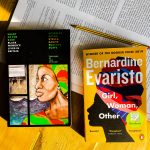 Girl, Woman, Other and Heart Of The Race: Pairing Fiction and Non Fiction