Open Water  by Caleb Azumah Nelson is so beautiful, absolutely a love story. Just a real one, truths always near the surface

My guy said the cover reminded him of Moonlight and I saw it. Then I had Moonlight in the back of my head for a lot of the book. So imagine me when the protagonist mentioned the film in the story….and even the scene I thought most of!

There’s a commonality with the film. It’s the vulnerability, giving yourself in to it. So tenderly communicated from a young Black man’s perspective. This is the truth: Love doesn’t happen in a vacuum. Falling in love doesn’t suspend police brutality while you solidify your bonds. This is genuine. There is a refreshing innocence in the way the photographer and dancer fall in love, the intimacy seems so real.

Caleb Azumah Nelson encapsulates so much (in just 145 pages). Sometimes we compartmentalise the impacts of brutality and micro aggressions in discussion. But actually it seeps into everything, it’s insidious. Though at first not obvious on the surface, It affects how the protagonist falls in love. And it’s hard to communicate those seemingly minor details. Like K’s character in  That Reminds Me we can see where the protagonist’s mental health and even grief hold him without his own will.

The writing is vivid, very intentional

Use of repetition and second person are very intentional, it feels like you are retracing your own memories and coming full circle. You are empathising with the protagonist… but the emotions are becoming yours. Azumah Nelson is asking you to own them.

At some point in the book, he says memories become fainter with each remembrance because eventually you are remembering the memories and not the event. Much of the story felt like de Ja vu. To manage to pull off this kind of stylistic feat in a debut is amazing!

The story feels like South London’s very own. The overground, the tube. The nods to the familiar locales. As always I felt absolutely seen by all the cultural references.  From the movies to the books and photography. I think at one point, Caleb Azumah Nelson even mentions the book about A Tribe Called Quest which is on this month’s to-read list for me.

I really get the impression I am reading the work of someone in love with writing here. Look forward to his next release

Open Water by Caleb Azumah Nelson will be published by Viking (Penguin) in February 2021. Available for pre-order

Thanks to Viking for the proof 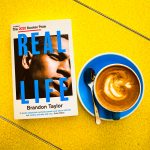 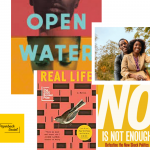